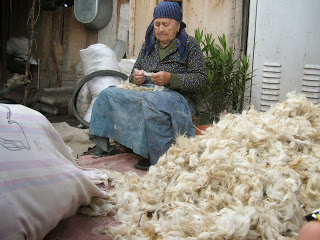 Sobur Margoshvili is 86 years old and was born in Pankisi. We visited her in her room full with her work. It looks like a small museum. The old woman was wearing a shawl, slumped into chair. Even the process of wool work has not changed, the same old wooden instruments. Her factory. I am sure this room has been the same for a long time. She is proud. It ís her world and she fits the environment. Old with her wrinkled face, muscled hands and some sadness appearing from time to time on her face.

They were big family. She had two sisters and a brother she recalls. “We lived in Duisi. My parents were rich farmers. They owned lands here and several houses, but later for this wealth, the family became victim of repression during the Soviet times.” She, the only child that was hidden at age 6 but her family spent life in exile.

“It was the hardest period of my life.” she says. The family was destroyed and was allowed to take just clothes and food with them. Local people pleaded to the government let the large family stay, but they were shown off on horseback ant the residents of Duisi followed them with grief and tears.

Sobur grew up with her relatives. It was Stalin period. I think people didn’t have right for property. You should have to work for the collective farm. After 13-year in exile first my brother came home, then others followed and my parents were the last who moved back home village, and we were together.

After 13 years the political situation changed. Her parents returned when she was 19. She fell in love with a local boy, got married after a year. She has two children and now she is grandmother of nine children.

Now she has a peaceful life, prays and is a member of a group of traditional religion followers. Sometimes with the group she visits holy places but never rests. She is involved in wool process in her working room you can see things made of felt: Small traditional hats, felt cloaks. “In my childhood people used to work on felt to make a living. We used to take these products to market in the city. It passes from generation to generation.” She explains the process with love and excitement. “First you wash the wool, and then scotch it, put it on a special board then you sprinkle boiled water and start processing with arms until it becomes one felt cloth.” “I work in the garden, help my family,” she smiles. “but I am unhappy anyway because I got old. I want to help my family as I used to do before” She proudly looks around. “I want to give you presents.” She hands me a small traditional hat, and cloak. She looked happy and pleased.