In March on Saturday I was in Tbilisi in the Techno Park. It is a very cool place where there are lots of new technologies. Most of them I liked. Samsung Gear V8 is virtual reality 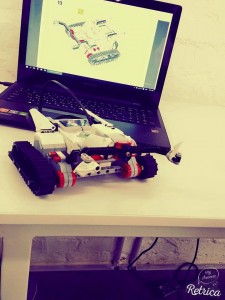 glass. Its second name is “Oculus Rift”. When you put on it you only can see playing video or a game. You can use it in a game too and in some games there is a first person camera view and it is very cool. With Oculus Rift you feel like you are in the game. Second technology I liked is a 3D printer. It can print anything you want. It can print toys, small houses and small statues. But it is banned to print guns with 3D printer. I liked building robots and installing program on them. My robot took second place in a race but the program of my robot was the best.

P.S this photo is of my robot 🙂

My first visit to Tsinandali: by Eva Aldamovi Bound: a poem by Laina Pareulidze