There are many problems in the Pankisi Gorge and one of the main problems was the problem of gas. In recent years, with the arrival of refugees the cost of wood gradually increased. As a result, deforestation became one of the problems for firewood.

So, when the government decided to connect gas, Pankisi people were very happy. 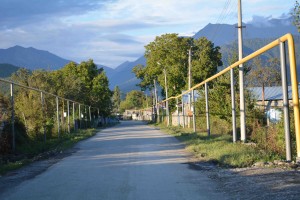 The works continued for months. Now it’s finished but locals aren’t sure they’ll have it. Some of them say that the works aren’t done well and they have to dig up the gas-pipes and re-make them again. The people are nervous. We discussed it with the director of these works.

The main works are done very well, so they don’t need fixing or remaking. Now people have to fix it in their houses. It costs 400 GEL for one family.  If it is a long distance or not, it doesn’t matter.

When we’ll have gas in our houses at last?

I can’t tell you the exact date, but it is said to be finished by the end of this year.