I want to begin with, that no one knows around the world what will happen to the world in the future. 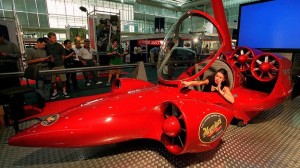 Often, people have their thoughts and opinions about the future. There are many people who say that they have predictions about future. In the 21th century there are lots of developed technologies and they’re developing every moment. Also there are lots of modern technologies that are very comfortable. In my opinion in the future technologies will be developed amazingly. I think that robots will be more popular and there won’t just be dolls and teddies for children. For example: babies will be very demanding and they will be playing with robots. Also it won’t be difficult to go to space or the moon. In my opinion, after many years it will be a bridge between the Earth and the moon or other planets. I also think that after many years Earth won’t be as colorful as it is

today because I think that after many years the Sun won’t be as shiny as it is. The Sun will catch cold. So, it’s my predictions, but I think that none knows what will be in the world.

Education: by Esiat Gaurgashvili A Park in Duisi: by Ramzan Margoshvili