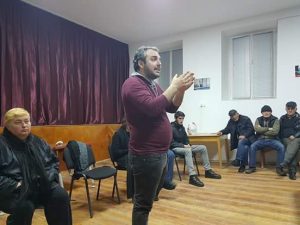 In Duisi Cultural Centre, Pankisi, the locals have assembled again to evaluate the hydro-power problems. Guests were received from; Tbilisi, the organizations Green Alternative, Human Rights and Monitoring Center, representatives from Kvemo Svaneti, Zemo Svaneti and Racha, who face the same problems connected to the building of hydro-power stations in their regions.

At the meeting the common problems were discussed. The guests from Svaneti and Racha shared their experience and problems with Kists. They stated that the hydro-power stations in the unique nature of Svaneti had a negative influence on the tourism. They also the mentioned that the construction works resulted in flooding. Because of this, the locals became refugees in their own country.

They expressed regrets of not raising their voice for the first time and allowed the building of the power stations.

The document “Environmental impact assessment review” was inspected, that permits the buiding of the hydro-power station Khadori 3.The report is signed by Ministry of Environment and Natural Resources Protection of Georgia.

According to the review the hydro-power station will have trifling influence on the biodiversity. In fact,the two existing hydro-stations have caused deforestation and the most important, the high voltage transmission lines affected on the health of the people. By the project of Khadori 3,the river Alazani will be placed into the pipes and the species entered in the Red Book will be wiped out, which is wrongdoing.

The document claims the locals are not dependant on the river Alazani. 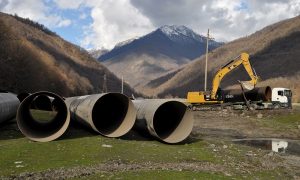 However, it supplies the cattle with water. If the river is placed into the pipes it will decline the amount of underground water, accordingly the wells will dry out in the village and the grazing lands will be devastated. At the previous gathering in the village Birkiani where the investor of Khadori 3 met people, gave them ridiculous answers for this issue, that he would provide them with water and hay. In this, he expressed his dishonest attitude towards the local society.

In the re view, they write the locals will be employed in Khadori 3. But we have an opposite practice.As we know, in Pankisi two hydro-power stations already exist where work only 4-5 people from Pankisi work. During the building process of these previous power stations the local Kists and refugees from Chechnya were cheated and had been working without payment for a month. They were told it was an experimental month. After a month they were paid 5 gel in a day.

The buiding of the power station will prevent the development of tourism in the region, where unemployment is severe problem. Our magnificent nature, the river Alazani,t the waterfall in Khadori are the only sights that attract tourists. If we destroy them, will any tourists arrive here or they will cease visiting Pankisi and Svaneti? By these illegal actions the population of Pankisi may lose any chance of getting income.

Another shocking fact is that the same investor plans to build 2 more hydro-power stations on the river Samkuristskali near to the protected area, the Preserve of Batsara.

The population of Pankisi did not know anything about the building of the new water power station until the trucks appeared loading the pipes. By the legislation the local residents have right to be informed about the project and the government must take their point of view into consideration. 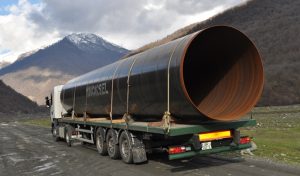 At the meeting Kists and the guests from Svaneti and Racha declared tolerance and readiness to support each other. The damage to the people from Pankisi. of the hydro-power station is higher than the profits. The locals suggest to find other alternatives of generating the power. They are fighting to survive and to protect their eco-system, of course within a judicial framework.

Rsf students win the marathon in running: by Hava Khangoshvili I am from Pankisi Valley and English changed my life: by Lia Pareulidze