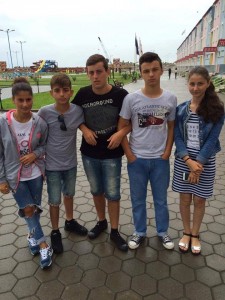 My summer was the best in my life. I spent it really very well. At first, I went to Batumi. After this, I had summer camp and on the 25th of August our school went to Anaklia. I can’t express my feelings. It was fantastic. The building where we were living was at the seaside. We spent 8 days there and every day was planned. In the morning we got up and did physical training. Then had breakfast and after breakfast we had 1 hour to swim. At 3 o’clock we had a nap. After that we had chorus time.  At this time, we always did exercises or played games. Then we had lunch and more chorus time. At 6 o’clock we played football, basketball, tennis and chess. In tennis we won a golden cup. After this competition we had supper in the evenings and we had to perform a concert. Every team had to have its own show. Every day we had different show concerts. One day we animated cartoons, the other day we shot film.  We also presented regions of Georgia with their culture. We had guest Giorgi Margvelashvili our President. On the last day we wrote memorable letters to each other. It was very hard to separate with new friends, but we didn’t have any other way. I hope I’ll have chance to go there again in the future.

The invention of car changed the world: by Iman Sviakaury My favorite job: by Makka Gaurgashvili