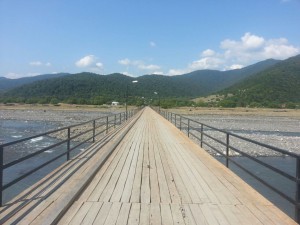 The building of car bridge in Jokolo is finally finished. During many years, the only connection between two villages was only a wooden bridge, which was not safe for people. Every day, lots of people move from one village to another. So two years ago the government decided to build new bridge, but it was stopped when only basic construction was built. After that, children, teachers and others were moving with this iron construction, which was absolutely horrible. One teacher hurt her leg when she was moving from Jokolo to Dumasturi.

Fortunately, this summer the new bridge was rebuilt. The Government made a floor on it and now it looks more beautiful and safer. They also are planning to set lampposts on it.

The locals are very glad that this bridge is built. It was very difficult for us to go to Dumasturi. Especially in rainy weather, when the level of the river became higher and it took the wooden bridge away. “I work in Dumasturi and I had to go the two villages on foot, it was a long way. Now I can get there in 5 minutes”. says Natela Cxadadze from Jokolo.