This week we were in Promote’s Cave in Kutaisi. In Promotes’ cave there are 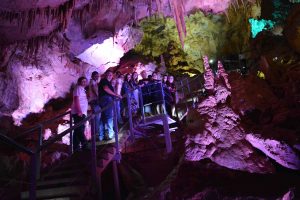 845 steps and this cave is very long. It is 80 meters deep under the ground. In Promete’s cave we had a 45 minutes excursion. I really can say that it was the nicest place in my life which I have ever seen. It was unbelievable.

There were high stalagmites. Scientist say that stalagmites need 1 century to grown up one centimeter and they were very long. There were 9 halls. 6 halls were for everyone and other 3 halls were for extremals (there is water and you can go to these halls only by boats).