Chanchqer, Hero, The Face of Pankisi, one of the most famous horse ever finished its career the day of Eid celebration. It died. The reason was a broken leg.

As we all know, fasting month for Muslim people, Ramadan, has just ended. In Pankisi there is a special tradition of celebrating it. It’s the day when young people from all over the valley get together and girls and boys take part in different competitions such as sport.  The most important activity of the day is horse racing. More then twenty local horses participate in the race.

Chanchqer appeared in Pankisi in 2014. The owner of it was local boy from Omalo who bought it for racing. It remained to be unbeaten since then. During this period it became the winner of races and a lot of boys became fans of the grey modest horse which is said to have a special manner of walking and stood out. There are several films made by locals and when it broke its leg, local boys put Chanchqer’s photos and videos on Facebook and expressed their condolences. I heard that some of them cried.

There is a special place not far from the River Alazani where people decided to build a hippodrome. The track is an open place near the bank of the river. Youngsters asked the tractor driver to make the surface more comfortable and like an ordinary track, because beforehand the race was held in the main street which was dangerous not only for horses but for the people moving in the street. In spite of the fact that youngsters tried to make it more comfortable they couldn’t avoid the tragedy. The track looks normal but there are some places that need to fill up holes. The spectators said Chanchqer was not the first having problem because of the bad track. Several horses have hurt their legs.

The race started in the afternoon, the weather was fantastic, a lot of people got together near the bank to watch the race. At least 15 horses came to participate in it. People knew some of them because they are popular in the region. Among them was Chanchqer and you could hear his fans confidently talk that it will be the winner of the main prize. The race started. After several minutes you could easily notice two horses that came out from the group. Gradually distance between the horses became bigger and bigger. Soon Chanchqer  ran first, and as later the rider said the boy of following horse shouted out to stop it because it broke its leg. “I felt that 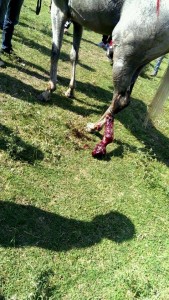 Chanchqer stepped in the hole because we lost balance, but it continued running. Then we stopped. I understood that something was wrong with it and quieted.” The wound was so serious that everyone guessed it was the last day for Chanchqer to participate in the race. People were disappointed and worried. What to do with it? With the broken leg it hardly managed to walk out from the field. There was long silence.  An experienced veterinarian said Chanchker had no chances to walk or get well. The horse was paralyzed and that’s why the owners had to take a hard decision.

An expert says that everything happened because of unprepared racing roads. The inhabitants of Pankisi asked many times to the government to make a road for a race. As we see, there are no results but just horses dying

Disappointed fans of Chanchker changed their profile pictures. Every adult posted its photos for respect.

Vardzia Excursion: by Maka Kushanashvili What a family means for me: by Maka Margoshvili