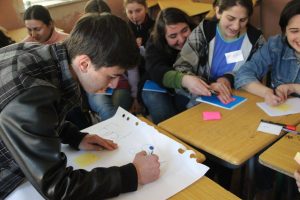 Last weekend in Duisi was a weekend-camp. It was financed by the McLain Association For Children. There were very interesting activities, intellect games, sport activities and more. The 2nd April was a day of autism, so we watched a video where a boy was shown with syndrome of autism but he had a very good talent for playing the piano. He had no idea about the music but when the audience asked him to play some music, he just played it. He had really talent.

Then on the second day we had other activities and we took our certificates.

After this we had meeting with Giorgi Mosidze in Duisi Public Centre. Giorgi Mosidze is a Member of Parliament and a director of the Georgian intellect game What? Where? When? This game is very popular in Georgia.

In this meeting he talked about his experience it was very interesting.