After 6 hours long drive away, at last we reached Dzevri. It was the 63rd anniversary of 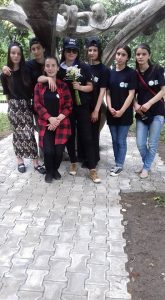 Dzevri’s school. We were met by the director and students very warmly. They had a farewell concert for the graduates.

The concert was organized very well by the school staff, especially the director. We liked it very much. We had prepared our surprise dance for them. It was Chechen dance lezginka, which they liked very much and they also danced with us.

After the concert, our new friends showed us their village sights. We played with them all day long and had a lot in common. We were surprised with their hospitality and warm greeting.

I want to underline that I haven’t never met such warm and friendly people like them. While we were there they became our best friends and family members. This friendship will last forever. Only two days had passed, but we miss them. We would like to see them again, this time in Pankisi.

Meeting with Journalists in Imereti: by Markha Margoshvili CineDOCYOUNG Festival in Tbilisi: by Fariza Dadaeva