On 8th of November we had meeting with the British ambassador. 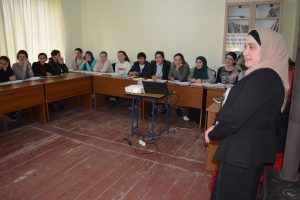 The meeting lasted 2 hours and it included some activities and games about second conditional sentences. Teachers from other villages also were at this meeting and they also took part in the activities. We asked the ambassador some questions. For example, I asked. “People say that hard work is important but there are some cases when people weren’t working hard and they succeeded. For example Bill Gates. He is the inventor of the Microsoft Company and he is the richest man in the world. So, what you think about it?” He said that hard work is important but if you don’t like that work what you do, it isn’t good because you are losing motivation, but if you like that work what you do it isn’t going to be hard work for you. In general the meeting was great. Children liked it and I am also glad to see the ambassador. He promised that he will come back, so we are looking forward to his visit.

Dreams come true: Living in a town: by Eliza Tokhosashvili