Last weekend in Tbilisi we met our Caucasus Youth Leadership Program group organized by The United States Embassy in Tbilisi. For 3 days we all were together. I realized that I had missed them. First day we had sessions with STEM academy. We spoke about new technology, science and maths. It was a very interesting meeting. Students from San Diego State University made their own speeches about computer science and computer engineering. They spoke about their inventions. To say truly it was really tiring but productive. At the end of all these sessions we had a meeting with NASA astronaut Heide Piper. There are less then 40 women who have been in space and Heide Piper is one of them. She spoke about space life. We all were excited.  The meeting was a question-answer type. On Saturday we went to the cinema to watch a movie about astronauts’ life. “Beautiful planet” was the name of the film. I have never seen such a cool documentary movie. Now I can proudly say that our planet is really beautiful. And the last part, which I really hate, is to say good byes. We all were crying. 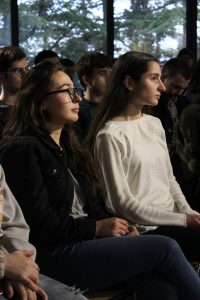 A message for students’ parents from Sakobiano: by The Parents of Sakobiano. Winning the important competition by Jokolo’s team: by Maka Kushanashvili