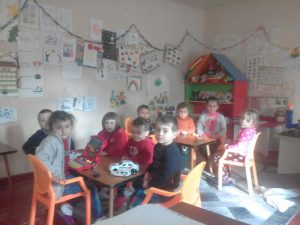 Hence, The municipality of Akhmeta decided to move it to the neighbouring village, Dumasturi. The municipality says that kids will be provided a microbus for transporting to the next village. But the residents of Khalatsani refuse carrying their children to the next village because the distance between the two villages is almost 4km. The parents say, “The long way will make the children tired. We are not going to carry our kids to another village and in every village there must exist a kindergarten”.