Have you ever heard that, “the girl’s destiny” is dependent on Elders in Pankisi Valley.

My grandmother was a happy school girl who was growing in a poor family, and was dreaming about becoming a teacher.

One day, she was informed, that she was engaged to a wealthy man who was twenty years older than she. She thought it was the end of the world. In spite of her objections, she was made to marry soon. She could not imagine how much disaster, she would face after her marriage. There were eighteen people in the husband’s family. So she was not a bride. She was a servant without payment. 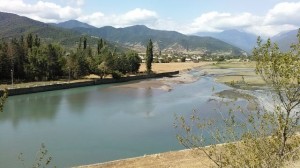 She gave birth three children. She says “they were the only bright points in her life”. She brought them up with a huge suffering. Unfortunately, the youngest son was lost in the first war in Chechnya, who appeared there by mistake. The oldest son and my father died in a car crash, when I was two years.

I have never seen as bearable person as my grandma is. Despite our steady attempts we have not managed to disappear the tears and sorrow on her tortured face.