There are many professions in the world and all of them are important.n But for me the most dangerous and heroic profession in the world is a fire fighter. When you are going to choose this job you should to be careful, because there is someone’s life in your hands and any of your mistakes could cause an accident. 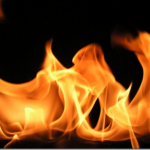 People always respect fire fighters, because when you are calling, they come to help you and fight the fire. The fire is an uncontrollable process, and it destroys everything in its way. Before the Christ people studied how to make it, but making it they had some difficulties also. Many people in the world died because of fire. I wont to highlight that lots of fire fighters die when they are trying to save other people’s lives. But as time goes by, their heroism is forgotten. This job is for brave and generous people.

Everyone knows about the tragedy happened on 11th of September 2001 when two planes controlled by terrorists crashed into the world Trade Center Twin Towers. It was the biggest tragedy in the world, and what heroism did fire fighters display! These people risked their lives for others. This is heroism. And only one word is enough. They are Heroes.

Wrapped in flames: by Adam Gumashvili Judging by appearance: by  Mariam Bagakashvili